THE HISTORY OF GAMIFICATION: HOW FUN BECAME THE NEW SERIOUS – part two

Welcome back time-traveller! If you landed here in the nineties, you’re probably coming from The History of Gamification – Part one where we talked about the first historical pillars of gamification. If not, maybe you should autostop here and go back in time to start from the very beginning!

In this article we’ll travel through the history of gamification starting from the roaring nineties and end our journey in 2010.

In 1996 another contribution from R.Bartle

Professor Richard Bartle proposed in 1996, a classification of 4 unique gamer types based on their different approach, while playing Multi-User Adventures. These types were:

As Bartle himself explains , the four types are extremes and people tend to drift among them. Besides, he later admits that this categorisation is suitable best for players of MUA. According to him, it shouldn’t apply perfectly to other games or contexts, including the gamified ones.

Nevertheless we included this theory among the historical ones contributing, because it laid the basis for future theories specific for gamification types of users.

Professor Bartle gave immense contribution in the history of gamification. 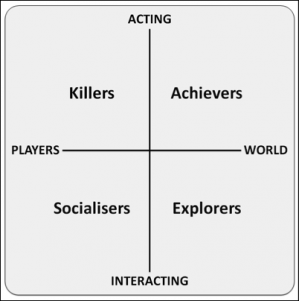 In the same year: Los del Rio made us dance with “Macarena”. Nicholas Evans instead made us cry with “The Horse Whisperer”

In 1999 S. Draper explores the importance of fun in UX

While the game industry is on fire, two years after the release of the first Playstation, the game market grew by about 15$ billions. That’s the same period when Stephen W.Draper published a paper suggesting that user enjoyment should largely be considered, when developing softwares and websites. That’s also the basis of UX/UI design.

In the same year: pop cult movies came out, such as American pie and Fight club (if someone asks, we didn’t talk about it). Plus many hits by Britney Spears, Christina Aguilera, the Backstreet Boys climb the pop charts.

2002, the first time “gamification” was used

A british computer designer, Nick Pelling, was the first to introduce the term to describe the phenomenon. He was asked to develop a game-like interface for ATMs. Working in that environment, he must have thought that it would have been useful to have a single word for the concept, even if not ultimate.

But “gamification” was in the end!

In the same year:  Alicia Keys debuts as “New Artist” and the Oscars go to “The Pianist”, “The Hours” and “Chicago”

It’s 2005 and the software company “Bunchball” is founded. Still on today, its aim is to help businesses to improve customer loyalty and online engagement, using game mechanics. In the same year, the company drove a massive flow to “Dunder Mifflin Infinity” website, a partner project with the famous “The Office“ show. The website was basically a social network: users were virtually transformed into an employee of Dunder Mifflin and had to complete tasks and quests in coordination with the show’s episodes.

Also the same year, gamification was the most chosen “weapon” by parents who wanted to make their children do the home chores: it’s the year of “Chore Wars”!

Joking aside, the fantasy-themed platform allowed users to gain experience and gold by completing their chores. Each chore completed would assign a set amount of experience points and gold coins. Through this, players could level up and buy rewards.

In the same year:  Hurricane Katrina strikes New Orleans and the colossus YouTube is founded.

Foursquare was basically a social network in the shape of a virtual map. It allowed users to check into a location. A system of notifications would inform other friends who could come and  meet. There was also a system of badges and leaderboards based on the amount of check-ins. The person who would check in the most in a specific spot,  could become the mayor of the place. This system encouraged people to go out and discover new places, meeting new people and old friends and creating a community. The badge system again proved to be a powerful tool to drive engagement, to build community and to have social impact.

In the same year: The “swine flu” is declared a global pandemic, meanwhile in the States, Barack Obama becomes president and Micheal Jackson dies, leaving the whole world in grive

2010-2011 Mc Gonigal, Zicherman and Deterding contributions to the history of gamification

In 2010 Jane McGonigal delivers a wonderful speech during Ted-ex explaining how Gamification helped many people to endure physical pain and chronicle diseases. She wishes for a world where games help people to solve personal and social problems.

Meanwhile Gabe Zicherman explains to the world, how gamification can be used to engage customers

A year later Sebastian Deterding will write a scientific article trying to better pinpoint the phenomenon. He will try to give the ultimate and complete definition of it.
In the same year: Shakira makes the world dance with Waka Waka  for the 2010 FIFA World Cup while Apple releases the first IPad.

Today we can perceive that gamification is embedded broadly and widely, but not always appropriately.

Sure, you can see bits of game mechanics and dynamics Game dynamics define the patterns of how the game and the players will evolve over some time.Some player might prefer competition, some other may seek social collaboration. The game dynamics tailor mechanics on the emotions that engage the player. almost everywhere: from language learning apps to meditation tools, ebook readers, job applications and social networks.

Marketers and entrepreneurs especially, seek to add value to users’ experience whereas teachers long to improve their students’ motivation.

But it’s not just about adding points and badges that these goals will be conquered. The real deal is to create such an exciting experience, that users will want to engage just for the sake of it and not for the reward: the payoff is the experience itself.

That’s called intrinsic motivation, and if you want to know more, have a pick at our article “theories behind motivation “

Thanks for having travelled with us in the History of gamification. See you next time!

THE HISTORY OF GAMIFICATION: HOW FUN BECAME THE NEW SERIOUS – part o…

In this article we'll go back in time to understand when gamification was born, who coined the term and which personalities helped its spread.